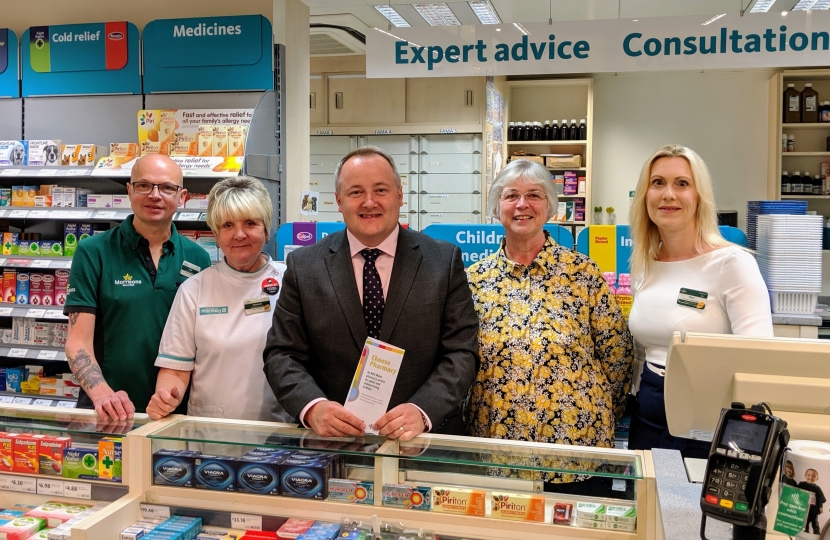 Darren Millar, Assembly Member for Clwyd West, has welcomed the Sore Throat Test and Treat service which has been piloted in local pharmacies across the country.

The AM recently visited the Community Pharmacy in the Morrison’s in Colwyn Bay, in his constituency and he said it is leading the way on the pilot scheme.

Commenting on the visit, Darren Millar AM said:.

Speaking at the launch of the scheme Darren said:

“This local innovation is doing fantastic work and is leading the way on the pilot scheme for a Sore Throat Test and Treat service in North Wales. It’s already delivered great results by radically reducing the amounts of medicines prescribed and reducing pressure off local GP services. This is a great example of introducing new thinking to the way health services are delivered in a more cost effective and patient focused way.

"The results of this pilot in Betsi Cadwaladr showed an incredible return in terms of a reduced medicines budget, an improved diagnostic service and a patient satisfaction rate of 99 per cent.”

“Darren Millar has long recognised the way in which community pharmacies play a pivotal role in making healthcare accessible on the high street. He shows his commitment to community pharmacy time and time again, and we are grateful he took time to visit Morrison’s in Colwyn Bay, which was one of the pharmacies to pilot this successful service.”

Betsi Cadwaladr had 1058 community pharmacy consultations for Sore Throat Test and Treat, resulting in just 14%people getting penicillin or a macrolide antibiotic. On the strength of the pilot phase, Betsi Cadwaladr has pledged to roll out the pilot across the whole of North Wales.