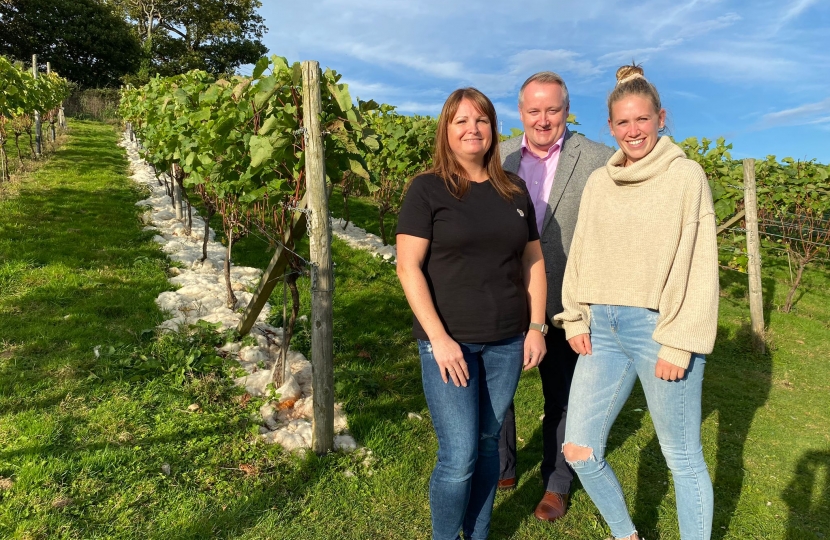 Shadow Minister for North Wales, Darren Millar MS, has toasted an award winning business in his constituency which has experienced repeated success since its establishment just under 10 years ago.

The Clwyd West MS visited Gwinllan Conwy vineyard in Llangwstenin last week to meet with owners Charlotte and Colin Bennett and hear more about their award winning wines and plans for the future.

Earlier this year the vineyard won the local food and drink category in the annual Countryside Alliance Awards. Also known as the ‘rural Oscars’ the awards celebrate the best produce, pubs and village shops in the UK.

They have also won numerous other awards over the years, which is remarkable given that they had no experience of growing vines when they first started out in 2012.

“It was great to meet with Charlotte and Colin and to hear how their business, which started with them planting just 300 vines back in 2012, has grown over the years, with them now having 3000 vines over 3 acres.

“What they have achieved in just under 10 years is incredibly impressive and they are living proof that hard work pays off.

“Gwinllan offers visitors tours of the vineyard and the opportunity to taste its award winning wines, which it also sells along with other Welsh produce in its on site shop.

“I had a great visit and encourage others to call in and support this fantastic North Wales business that is making waves internationally.”