Brexit: “Wrong to call for another vote because you don't like the outcome" 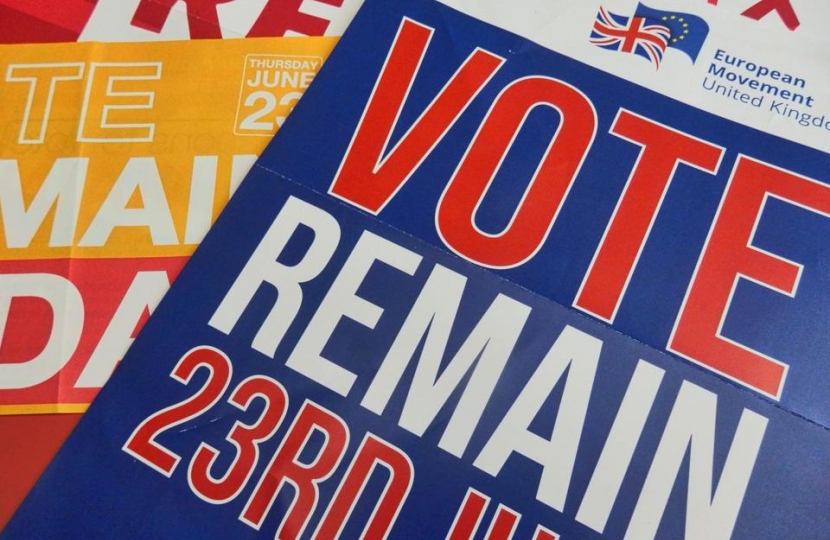 Shadow Cabinet Secretary for External Affairs and International Relations, Darren Millar AM, has hit out at Assembly Members who yesterday backed a call for a new referendum on whatever terms are proposed for Brexit, with the option of staying in the EU on the ballot paper.

Speaking in the debate,  Darren said it is wrong to call for another vote because you don’t like the outcome and criticised those who supported the motion for disregarding the 17.4 million people who voted to leave the European Union.

“It feels a little bit like groundhog day every time I get up in here for one of these debates, because, yet again, we are discussing a Plaid Cymru motion that is seeking to have another vote in order to overturn the outcome of the first one. But let's not forget that 17.4 million people in the UK, the biggest mandate for anything in British political history, voted to leave the European Union. Carmarthenshire voted to leave. Anglesey voted to leave. Rhondda Cynon Taf voted to leave.

“Yet, their Plaid Cymru Assembly Members repeatedly come to this Chamber looking for ways to undermine democracy and to overturn the will of their own voters, because they believe that politicians know better than the people and that, despite a clear majority wanting to leave, the Welsh political establishment claims to know better and wants to keep Wales in the EU.

“Last week, we saw the Brexit Party win two of the four Welsh seats in the European Parliament, topping the poll in 19 out of the 22 Welsh local authority areas with 32.5 per cent of the vote for the pro-Brexit stance that they took. That's a clear message to all of us in this Chamber to get on with it.

“You can't claim to be respecting the outcome of the referendum in any way if you're a person who advocates a second referendum that is a rerun of the first, with 'remain' on the ballot sheet, because that is what you are trying to do.

“You can't simply call for another vote because you don't like the outcome.

“I urge everybody who respects democracy to reject this ridiculous motion from Plaid Cymru and to support our amendment, which makes it clear that the outcome of referendums should always be implemented when we put these questions to the people.”

A total of 36 AMs backed the Plaid motion, versus 16 against.