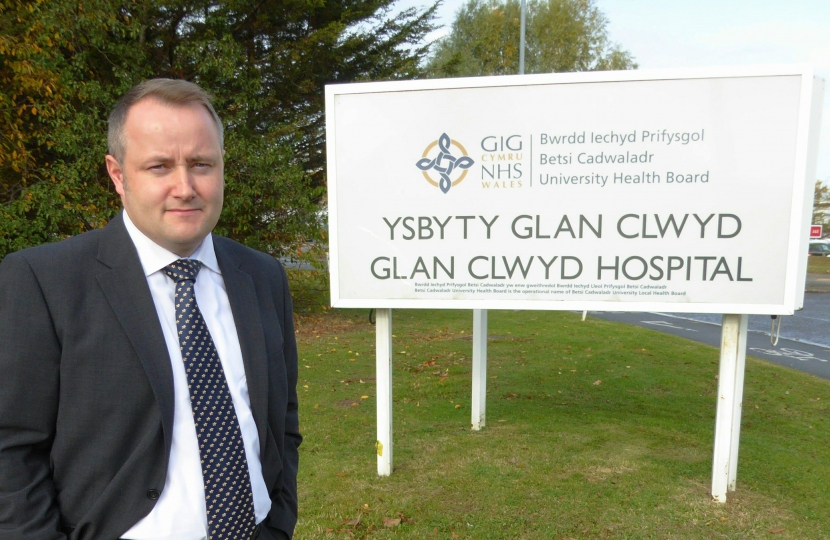 Clwyd West Assembly Member and acting Shadow Health Minister Darren Millar has called on the Welsh Health Minister to resign after a committee inquiry concluded that the current special measures arrangements at Betsi Cadwaladr University Health Board are not working.

An inquiry, by the National Assembly for Wales's Public Accounts Committee, has found there had not been the desired level of improvement at Betsi Cadwaladr University Health Board (BCUHB) since it was put in special measures in 2015.

The report states "Overall, we remain deeply concerned about the slow pace of change and limited improvement given that nearly four years have passed since the Health Board was put into special measures."

Commenting on the findings, Darren said:

“It is clear from this report that the current special measures arrangements are not working.

“The Welsh Health Minister should accept responsibility for failing to deliver the required improvements in the health service in North Wales and resign.

“We desperately need a new approach to delivering change in the Welsh NHS and I urge the Welsh Government to take the rapid action needed to restore confidence in the health service.

“Our five point plan for a safer, more accountable and listening NHS would go a long way to addressing these issues.”

End the system of Ministerial appointments to health boards and introduce a system of elected health commissioners directly accountable to the public in each health board area they serve.

2. Introduce a Duty to Disclose for NHS staff

Introduce a new duty on all NHS staff to disclose and record when things go wrong, including providing details to senior managers and reporting them to the healthcare inspectorate.

Establish a Welsh NHS Leadership Council which all senior managers and executives will be required to register with. Those found responsible for serious NHS failings will be deemed incompetent removed from the register and prevented from working in the Welsh health service.

Radically overhaul the healthcare inspectorate to make it entirely independent of Welsh Government and give it new powers to intervene quickly when problems are identified. Treble the inspectorate’s budget to expand its programme of unannounced inspections and ensure that requirements for improvement are implemented.

5. Enhance and Invest in Patient Watchdogs

Protect the independence and capacity of Wales’ Community Health Councils, by removing the ability of Ministers to appoint their members and increasing their funding to support their work as patient watchdogs and provide more support for patients raising concerns and complaints about the health service.