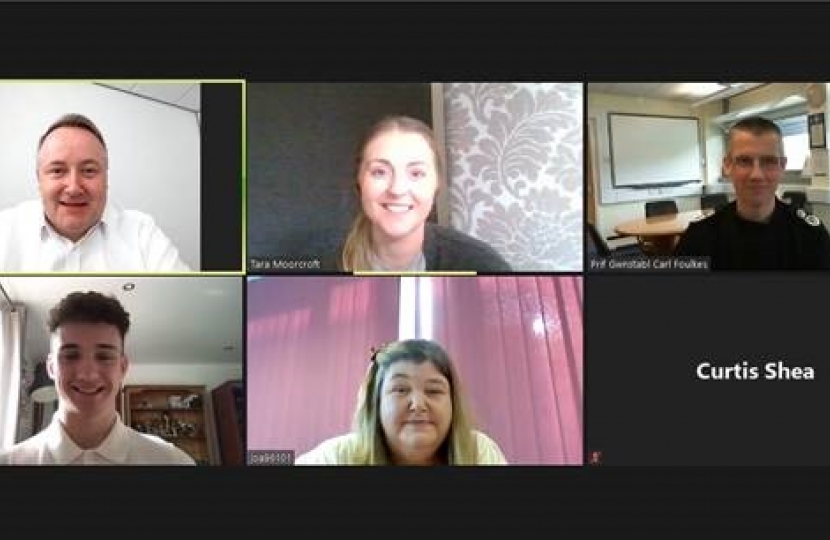 A campaign to promote safer driving among first-year drivers following the tragic death of a Denbighshire teenager is gathering further pace having now received the support of the Chief Constable of North Wales Police.

Chief Constable Carl Foulkes met this week with Clwyd West MS Darren Millar, Jo Alkir and Joe Hinchcliffe, who are leading the ‘Olivia’s Legacy’ campaign, to discuss its aims and a way forward.

The campaign was established after 17-year-old Olivia Alkir was killed in a horrific crash on the B5105 between Ruthin and Clawddnewydd in 2019. It calls for all new drivers to be required to have a black box fitted to their vehicle for the first year after they pass their test and a limit on the number of passengers they can carry to one, in order to promote safer driving.

Following this week’s meeting with the Chief Constable, Darren said:

“The Chief Constable was very supportive of the campaign and advised us that improving road safety and reducing the number of deaths is a priority for North Wales Police, which was great to hear.

“Sadly, too many young people, like Olivia, lose their lives on the roads and it is vital that measures are taken to reduce the number of deaths in the future.

“This campaign is really gathering pace now, with the Association of British Insurers (ABI) having already agreed to share its calls with their panel of insurers, and leading UK insurance company Admiral has also been discussing the campaign’s proposals with us.

“To now have the support of the Chief Constable is fantastic and I thank Carl for taking the time to meet with us.”

Joe Hinchliffe, Olivia’s best friend who was a witness of the accident, said:

“The support we have received for the campaign to date has been amazing and I am extremely pleased that the Chief Constable took the time to meet with us and is also in support of what we are doing in memory of Olivia.”

“I would like to thank the Chief Constable for meeting with us to discuss the campaign’s proposals. We will never get over losing Olivia and I don’t want any other parent to have to go through what we have. I look forward to working with North Wales Police to make our roads safer.”