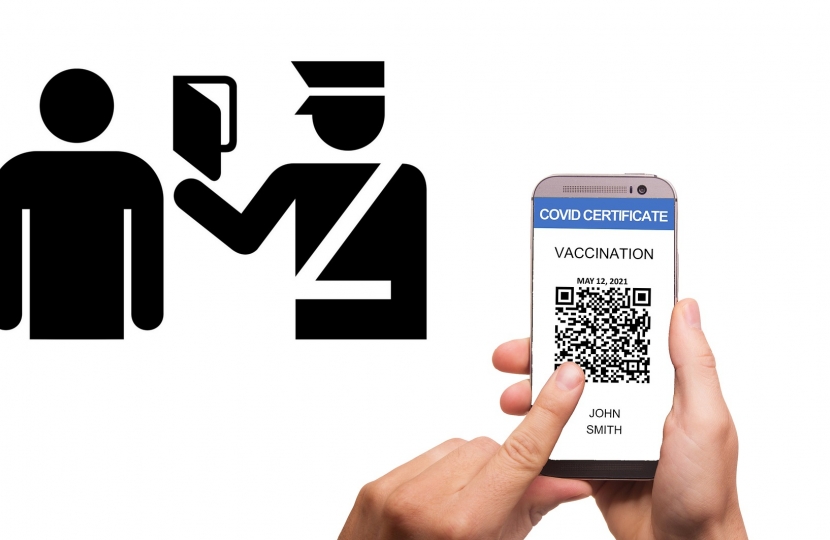 When I made the case against Covid passports and their expansion to cover cinemas, theatres, and concert venues beyond large indoor events and nightclubs earlier this week it was one of the easiest arguments I have ever had to make in the Senedd.

The simple truth is that there is no evidence that Covid passports (or passes as the Welsh Government has attempted to re-brand them) actually work.

In order to qualify for a Covid passport in Wales you must be either double vaccinated or have a negative test result within the past 48 hours.

It sounds perfectly sensible until you are confronted with the facts that people can still catch and spread the virus even if they have been double jabbed, and that anyone can enter a negative test result in the self-certified system, even if they have tested positive, because the system isn’t policed.

The system is so easy to circumvent that you could swab your dog and pass it off as a legitimate test for Covid passport purposes. Labour MSs even admitted that this loophole meant the law was flawed yet still, like sheep, they followed the Welsh Government whip and passed it.

A system which is fundamentally flawed in this way is not fit for the purpose for which it is intended and could lull people into a false sense of security that the Covid passport system protects them from the virus, even when it patently does not.

The first job of legislators is to make good law and strike down bad law, and this law is very bad indeed.

Any system that has such major flaws and is open to abuse is not worth the pain and inconvenience for individuals, who now have to face the prospect of sharing private medical information with strangers, and industries which have already been knocked for six by the pandemic.

We've often been told by Labour Ministers that they are listening to the experts. Yet the Welsh Government's Technical Advisory Cell on coronavirus has indicated that vaccine passports will have a minimal impact on the spread of the virus and its own Chief Medical Officer, Dr Frank Atherton, said just last week that the actual direct impact of passports is probably quite small.

How can the public and businesses be convinced of the need for Covid passports when the Government’s experts are not convinced?

There is no compelling evidence that nightclubs and cultural venues such as cinemas, theatres and concert halls are hotbeds of Covid infection, but there is plenty to suggest that they are amongst those businesses that have been worst affected by lockdowns.

The CEO of the UK Cinema Association has warned that this move could lead to the closure of many smaller venues, stating that “where similar schemes have been introduced in European territories, we have seen admissions drop by as much as 50%.”

It’s clear from these comments that people’s jobs and livelihoods on the line.

The Creative Hospitality Group has also said that there is now a huge lack of trust in the Welsh Labour Government, and that, despite employing 10% of the Welsh population, the industry feels belittled by the First Minister.

Covid passports will almost certainly cost many businesses in terms of footfall and extra expenses hindering their recovery from the pandemic.

The First Minister, seemingly undeterred by being banned from pubs across Wales earlier in the pandemic, has also put hospitality venues such as cafes, restaurants, pubs and bars on notice that Covid passports will also apply to them unless case rates fall.

Thankfully, cases are falling, yet in spite of this Covid passports were extended this week so I fully expect the Welsh Government to press ahead with extending this flawed scheme further in due course, regardless of where the evidence leads.

So, if this scheme doesn’t work, what should Welsh Ministers focus on instead?

Instead of being distracted by a flawed Covid passport system the Health Minister should be putting all her efforts into rapidly increasing the uptake of booster jabs ahead of what is likely to be yet another difficult winter for the NHS.

Sadly, the Minister has rejected our calls for walk-in centres where eligible people can go and get their jabs without having to wait to be invited. She said that would lead to a “free-for-all” where “everybody is invited”, which is nonsense when there is a clear eligibility criteria.

They limit our freedoms but not the spread of Covid-19.

Covid passports are a route out of restrictions; they are a restriction.

Welsh Conservatives will continue to oppose them.