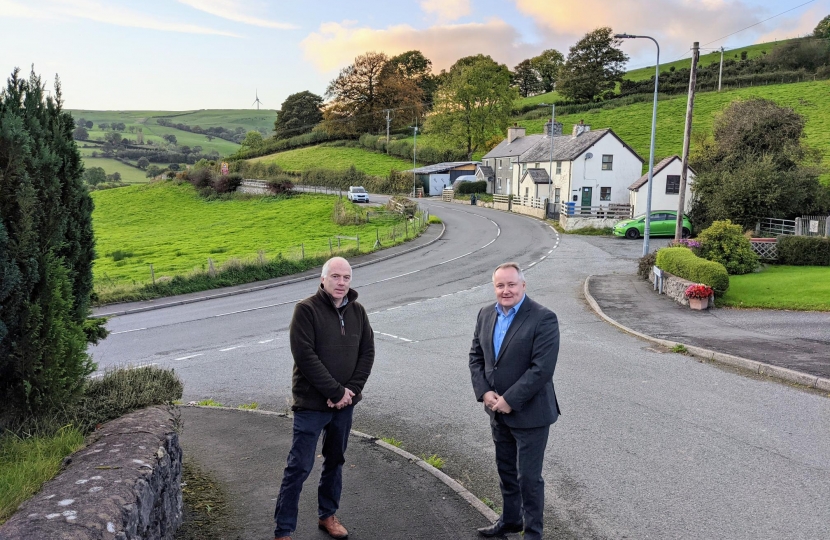 Clwyd West MS Darren Millar has criticised the Welsh Government for failing to fulfil its promise to upgrade the Maes Gamedd bends, despite repeated warnings about how dangerous they are.

The bends in Gwyddelwern, Denbighshire, have been in need of an upgrade for well over a decade and are deemed to be hazardous, but in spite of assurances from the Welsh Government that improvements would be delivered, they haven’t been forthcoming.

Darren has been working with Gwyddelwern Community Council and the Denbighshire County Councillor for the ward Cllr Hugh Evans for many years to try to move the project forward and finally, in February of last year, they were told that work should be undertaken by the end of March 2021, but after chasing with the Welsh Government’s Transport Minister in March, Darren received a response stating that the works had been kicked further down the road with a new date of September set for completion.

However, two months on from this date the Welsh Government still hasn't commenced work to improve the junction.

Following a recent visit to the site with Cllr Evans, Darren said:

“It is appalling that residents are still waiting for these improvements. They have been promised time and time again by the Welsh Government that they are forthcoming, yet there is still no progress.

“I’m quite certain that if these improvements were needed in South Wales they would have been completed years ago.

“It is unfair and totally unacceptable that residents in Denbighshire have had to wait so long and are still no clearer as to when the improvements will be made.

“I will be pursuing this with the Transport Minister.”

“We can not afford to have any further delays. The Maes Gamedd bends are dangerous and the Welsh Government need to act fast before someone is seriously injured or killed.”