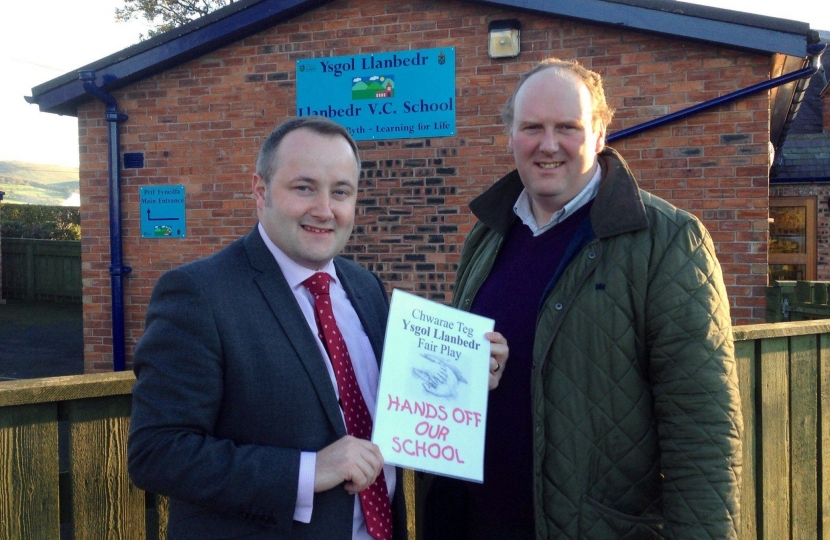 Clwyd West Assembly Member Darren Millar has called on the Education Secretary to end the uncertainty over the future of Ysgol Llanbedr in Denbighshire.

Speaking in the Senedd yesterday, Darren expressed concern that five years down the line, parents, staff and children at the village school are still no clearer about whether it will remain open in the future.

Raising the matter during the Business Statement, Mr Millar said:

“Can I call for a Statement from the Cabinet Secretary for Education on the process by which she determines school closure proposals that have been referred to her?

“She will be aware that there is an outstanding school closure proposal that has been on a desk in the Welsh Government’s offices waiting for a determination for the past 31 months, in respect of Ysgol Llanbedr in my constituency.

“The uncertainty around this particular school closure proposal goes back even further than this, some five years in total, and it is grossly unfair on pupils, parents and staff to allow it to continue.

“Yet in spite of the uncertainty, the numbers at the school are buoyant, it's entered into a successful federation arrangement with another local school, and its most recent Estyn report is excellent.

“I'm sure that you would agree with me that such uncertainty for such a long time is completely unacceptable, and that this now needs to be determined as a matter of urgency. So, I would appreciate a statement clarifying the process, and the appropriate timescales for decision making, from the Cabinet Secretary for Education.”

Darren was told the Cabinet Secretary for Education  will write to him.