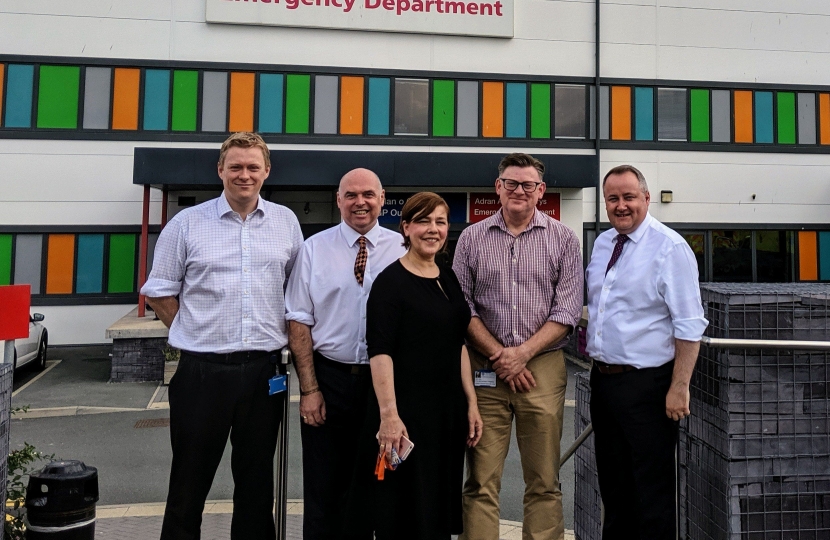 The leader of the Welsh Conservatives, Paul Davies AM, and Assembly Member for Clwyd West, Darren Millar AM visited Glan Clwyd Hospital Emergency Department yesterday to witness first-hand the pressures being placed on front-line staff.

Before being given a tour of the A&E Department at Glan Clwyd Hospital both Assembly Members travelled using the park and ride service, which was recently extended by the Health Board to run until the end of October following calls from Darren save the scheme.

“I am delighted that the park and ride scheme has been extended, but the shortage of parking spaces at Glan Clwyd will not be resolved in the next four months, so it is vital that the service is made permeant. We can see here today just how hard it is for patients and visitors to find a parking space.

“The front-line staff here are heroic and are doing absolutely everything they can for their patients in incredibly difficult circumstances. They have my full support as they seek to improve patient care and eliminate unacceptable waiting times in the Emergency Department.

“I would like to pay tribute to the dedicated team we saw at Glan Clwyd Hospital A&E this morning. It is clear that the doctors and nurses are doing everything they can to provide the best possible care for their patients. I hope to visit again later in the year to see evidence of the progress which has been promised.”