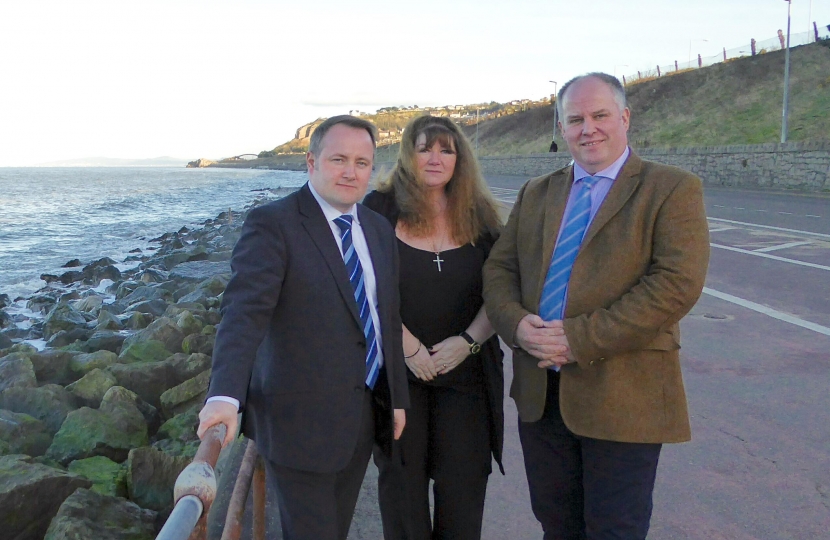 Clwyd West Assembly Member Darren Millar, who has been calling for strengthening of the sea defences at Old Colwyn for years, has this week demanded a Statement on the situation from the Welsh Environment Minister.

Raising the matter in the Welsh Parliament during yesterday’s Business Statement, Darren said that the sea defences are “at risk of catastrophic collapse”  and appealed to the Welsh Government to provide funding so they can be properly upgraded.

Speaking in the Senedd, Darren, who earlier this year called on the Welsh Government to organise a summit of decision makers to overcome the lack of progress in addressing the fragile sea defences in Old Colwyn, said:

“I call for a statement from the Minister for the Environment and Rural Affairs in relation to Old Colwyn's sea defences. I know that I've raised this matter on many occasions over the years in this Chamber, but you'll be aware that Conwy County Borough Council are trying to revisit the situation and have reassessed the current state of those sea defences. They have warned that the sea defences are at risk of catastrophic collapse.

“The sea defences are right alongside the A55 and the north Wales railway line, and in addition, they protect a significant part of the sewerage network in the Old Colwyn area. I think it's absolutely essential that we get to grips with the issue and that we can have those sea defences properly upgraded rather than the patch repairs that are done on an occasional basis by the local authority at the moment. I know that the budget round is coming up, and I think that may give scope for a big infrastructure project in places like Old Colwyn in order to protect that part of the coastline from collapse. I wonder whether we could have a statement on the readiness of the Welsh Government to address this particular problem in my constituency.”

The Minister for Finance and Trefnydd, Rebecca Evans AM, told Darren to write to the Environment Minister with his specific concerns, “particularly relating to the sewage line and so forth”.

Speaking after the exchange, Darren said:

“I’m very concerned about the fragility of the sea defences in Old Colwyn and I have already written to Ministers and petitioned them on a number of occasions to no avail. The Welsh Government must use the opportunity in this years’ budget round to resolve this issue once and for all.”