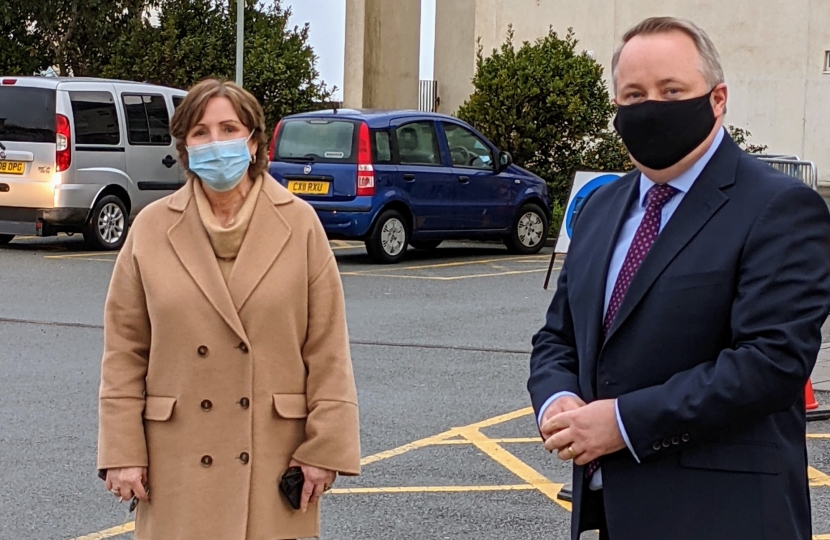 Two politicians have applauded the team working to protect the people of North Wales from Covid at the Mass Vaccination Centre in Llandudno after seeing them in action last week.

Clwyd West MS Darren Millar and Aberconwy MS Janet Finch-Saunders visited the centre, which is based at the Rainbow Hospital in Llandudno, on Friday and were extremely impressed by what they saw.

“We toured the facility, met and spoke with NHS staff, the military personnel and volunteers working at the centre and thanked them for their amazing efforts in rolling out the vaccine to our constituents.

“Ysbyty Enfys is the busiest vaccination centre in North Wales with around 1 in 5 vaccinations being undertaken there. The team are doing a sterling job, working flat out to ensure people are protected from this awful virus; I can’t thank them enough for what they are doing.”

“The operation at the Mass Vaccination Centre deserves high praise indeed. Prior to my visit, I had received many excellent reports from constituents who have been vaccinated there and was extremely thankful to the team for all their efforts,  but having now witnessed the operation first hand I commend them even more.

“They have been dealt a huge task, but they are dealing with it efficiently and swiftly and anyone due to be vaccinated at the centre can rest assured that they will receive the best service.”

Conwy County Borough Council have agreed to reopen public conveniences in a Conwy village, which have been closed since early last year.