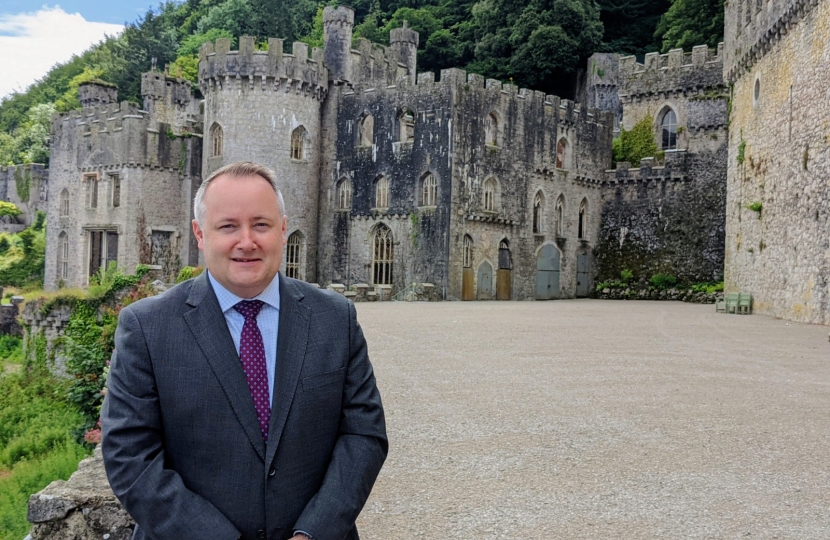 After being contacted by a number of Abergele residents concerned over the amount of traffic near to the entrance of Gwrych Castle, Clwyd West MS Darren Millar has called on Conwy Council to take action to address the issue.

Gwrych Castle has been proving a very popular with visitors since it hosted the 20th series of ITV's I'm A Celebrity...Get Me Out Of Here! last year.

However, a surge in visitors has resulted in 'gridlock' near the large arch stone arch off Tan-Y-Gopa Road.

This acts as the main entrance to the castle but also leads to Manorafon farm park attraction and the campsite.

"Obviously, no one could have anticipated the visitor interest that the Castle would receive following last year’s ‘I’m a Celebrity’ and it’s been an incredibly busy year for many attractions across North Wales so it should come as no surprise that there is extra traffic accessing the site.

"There are times when it can be very busy and I have seen congestion myself around the Tan-Y-Gopa Road and Market Street junction when visitors are turning into the main Castle gates.

"Part of the problem is the track that leads to the castle grounds, which isn’t in the best of conditions and is very narrow in places which doesn’t allow the traffic to flow as freely as it could.

“I understand that the track is due to be upgraded over the autumn so this should help to alleviate matters.

“I have written to Conwy County Borough Council to ask the highways team to take a look at the problem and see whether some improvements can be made to the area around the junction to resolve issues.”

"We are aware of concerns raised by local residents.

"We will be working closely with the Gwrych Castle Trust, the TV production company and North Wales Police between now and the start of filming on site in the autumn to manage traffic in the area."

A source from the castle said: "ITV are going to be upgrading the driveway as a legacy driveway.”

Yet another Colwyn Bay GP surgery hands in its notice

Clwyd West MS Darren has expressed deep concern that yet another GP surgery in Colwyn Bay has handed in its notice to end its NHS contract.