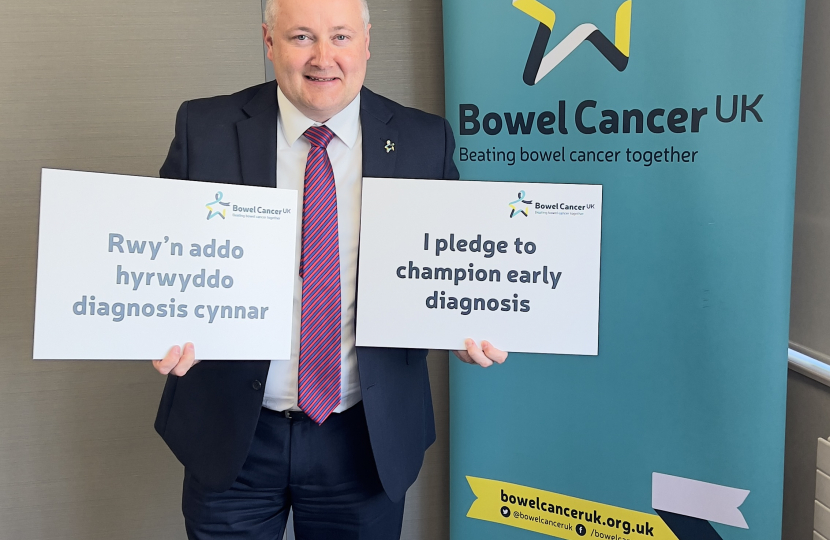 Clwyd West MS Darren Millar is supporting Bowel Cancer Awareness Month this year by helping make people in Conwy and Denbighshire aware of the signs and symptoms to look out for.

Bowel cancer is the fourth most common cancer in Wales with almost 2,300 people diagnosed every year. Sadly, more than 900 people die from the disease each year, making it the second biggest cancer killer in Wales but it shouldn’t be as it’s treatable and curable especially if diagnosed early. Nearly everyone survives bowel cancer if diagnosed at the earliest stage. However this drops significantly as the disease develops.

After attending a drop-in event at the Senedd today, hosted by Bowel Cancer UK, Darren said:

“I am pleased to be working with Bowel Cancer UK to raise awareness of the signs and symptoms of the disease, help improve early diagnosis and access to best treatment and care both in Clwyd West and nationally.

“Bowel cancer remains the second biggest cancer killer in Wales, despite being treatable and curable, especially if diagnosed at an early stage.

“New findings released by Bowel Cancer UK for Bowel Cancer Awareness Month have revealed that nearly half of people (48%) in Wales cannot name a single bowel cancer symptom. Early diagnosis is essential to improving bowel cancer outcomes and being able to recognise the symptoms and speaking to your GP when you feel something isn’t right, could save your life.”

The symptoms of bowel cancer can include:

“Bowel cancer remains the second biggest cancer killer in Wales, and it’s shocking that people aren’t aware of the symptoms to look out for. We’re delighted to have the support of Darren who attended our event at the Senedd and who will help raise awareness of bowel cancer in Clwyd West.

“If you notice any signs of bowel cancer, or if things just don’t feel right for you, please visit your GP. While the disease largely affects people over the age of 50, almost 100 under 50s are diagnosed each year Wales, so it’s really important people seek advice as soon as possible - whatever their age - if they’re worried.”