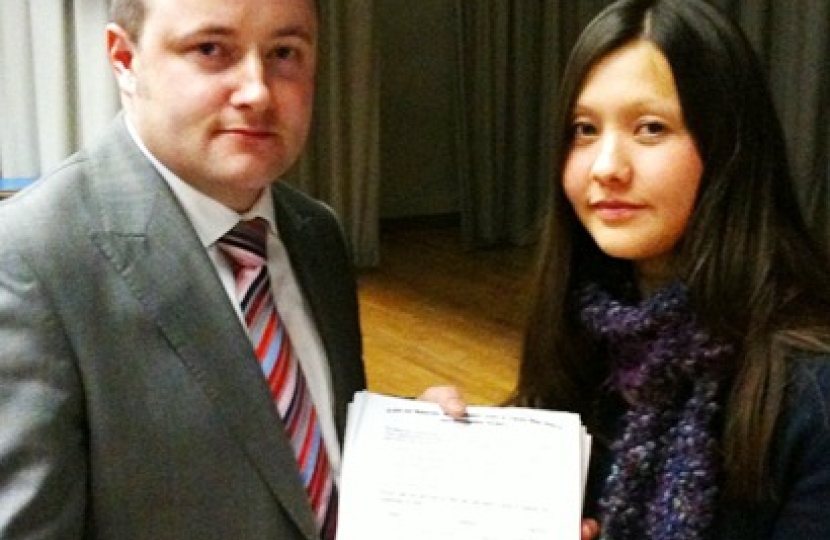 Scores of people braved the snow to turn out for a public meeting in Abergele to discuss on-going North Wales health reviews into maternity and children’s services and emergency general surgery services.

Following widespread concern over the lack of consultation by the Betsi Cadwaladr University Health Board, Clwyd West Assembly Member Darren Millar organised the meeting to ensure the public could have their say into the future of health services in North Wales. Scores of people participated in the meeting at Ysgol Emrys ap Iwan including doctors, patients and members of the public. Putting party politics aside, the meeting was co-chaired by Vale of Clwyd AM Ann Jones and presentations were heard from the Health Board and the Dr Eamon Jessop on behalf of the British Medical Association.

‘It was good to see that scores of people were prepared to turn out for this evening’s meeting in spite of the poor weather across North Wales and I was very grateful to each individual who shared their personal stories with those gathered.

‘I was very disappointed that the Health Board was not able to rule out the possibility that consultant led maternity services at Glan Clwyd and other District General Hospitals could be downgraded to midwifery led maternity units.

‘There has been widespread criticism from doctors, patients, medical staff and the public over the way in which these reviews have been conducted so far and the people of North Wales are understandably outraged at the lack of engagement with patients in the process.

‘I organised this meeting to ensure that local people could have their say about the future of their NHS services in their area and the strength of feeling tonight clearly shows that the public resolutely reject the any proposals which will put lives at risk.

‘This week the Health Minister gave me her assurance that she would be prepared to intervene if the public are not properly consulted on changes to local health services. I will be holding her to that commitment if the Betsi Cadwaladr University Health Board chooses to ignore the voices heard so clearly tonight.’