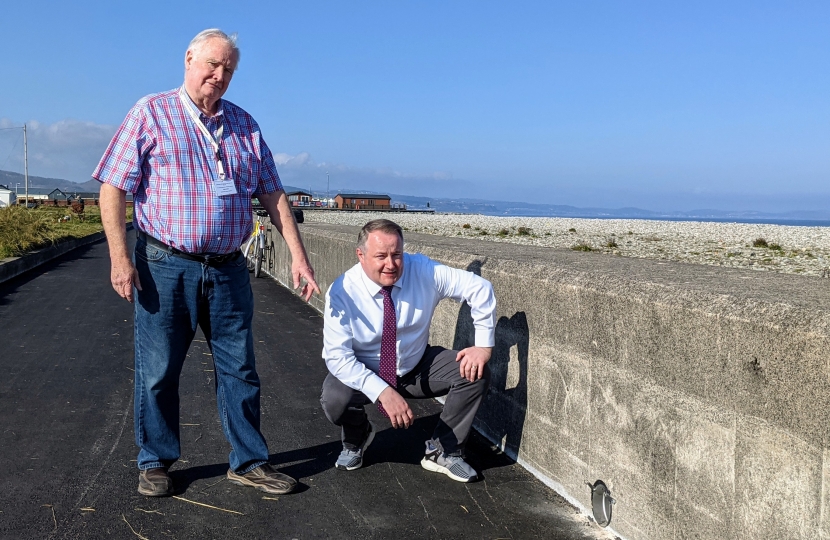 Clwyd West Welsh Conservative candidate for the Senedd elections Darren Millar is reassuring residents that holes in the sea defences in Kinmel Bay are “nothing to worry about”.

Darren visited the defences with the Chair of the Morfa Rhuddlan Flood Partnership Group, Cllr Geoff Corry, last week after both were contacted by residents in recent weeks expressing concerns about holes that had been drilled through the sea defences by contractors working for Conwy County Borough Council.

However, having inspected the site they are pleased to be able reassure residents that the holes are for drainage purposes and not a cause for alarm.

“I am keen to reassure residents that these holes do not undermine the flood protection afforded by the sea defences and will actually help to prevent water pooling on the promenade and flooding onto the Sandy Cove estate following overtopping events when there are high tides and onshore winds.

“Significant investment in the sea defences is planned in the near future to upgrade the defences between Llanddulas and Kinmel Bay and residents will hear more about this in the coming months.”

“I would like to thank all the residents who contacted Darren and myself regarding these holes.

“With the flooding that has been experienced in this area over the years, I can fully understand why residents were concerned to see these holes, but I can totally reassure them that they have been installed for a reason and will in no way cause any flooding problems.”