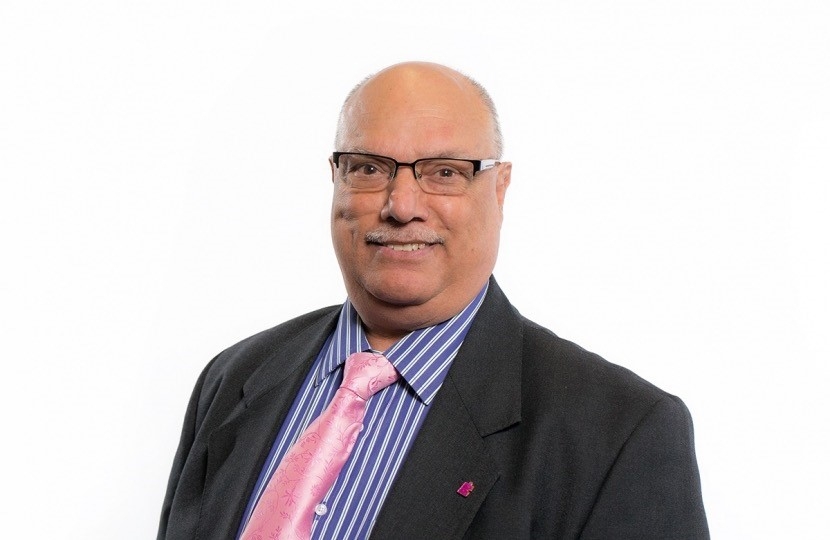 A conspicuous blue plaque on the wall of an unassuming property in Newport reads as follows:

Those who visited the Asghar family home would soon find that Oscar was all of those things described on that plaque and so much more.

He was a devoted husband to Firdaus and a loving father to Natasha, both of whom he loved and spoke of often.

He was a man of great faith, generosity and integrity…

… and a perfect embodiment of the Commonwealth and the most loyal subject that Her Majesty the Queen could ever have hoped for.

Mr Asghar to some, Oscar or Uncle Oscar to others, and to me, a true friend and colleague.

From the moment we enjoyed our first curry together during discussions about him joining the Welsh Conservatives, we hit it off.

Over the 13 years I knew Oscar we never had a cross word, which, as those of you who know me will testify, is quite an achievement!

We enjoyed many a heart to heart on matters of faith, family and politics.

As is the case for other Members of this Parliament, some of my fondest memories of Oscar were during the Welsh Conservative visit to the Holy Land.

There was no greater supporter of Israel and advocate of peace in the middle east than our Oscar!

While from different faith traditions, Oscar and I prayed together for the peace of Jerusalem at the Western Wall…

… and prayed for one another’s families as we sat, arm in arm and with tears in our eyes, in St Peter’s Church set amongst the ruins of the biblical town of Capernaum on the shores of lake Galilee.

During that trip we also visited the modern Palestinian town of Rawabi a brainchild of the famous Palestinian entrepreneur Bashar Masri.

The Group had arranged to meet Mr Masri in a posh café and the meeting was chaired by Oscar.

It all went incredibly well and, after the meeting we all strolled back to the minibus which was waiting to collect us and whisk up onto our next appointment.

Just as we were about to set off we suddenly realised that someone was missing and, after a roll call, we realised that it was, as is often the case…

Oscar looked at me worried, ‘Where is he?’, he asked.

I responded, ‘He’s probably explaining the intricacies of the Barnett Formula and Fiscal Framework for Wales to the Arabic waiter!’

At which Oscar fell about in uncontrollable laughter to the extent that he looked like a laughing policeman on the promenade in a Welsh seaside resort.

His laughter was infectious and by the time Mark finally arrived at the bus we were all wiping the tears from our eyes.

That’s the Mohammad Asghar, the Oscar, the friend who I will always remember.

So colleagues that blue plaque in Newport doesn’t do the Oscar we all knew and loved any justice at all.

Let’s hope that at a future date there will be a more suitable, permanent reminder in a more prominent public place of this great man and his contribution to Welsh public life.