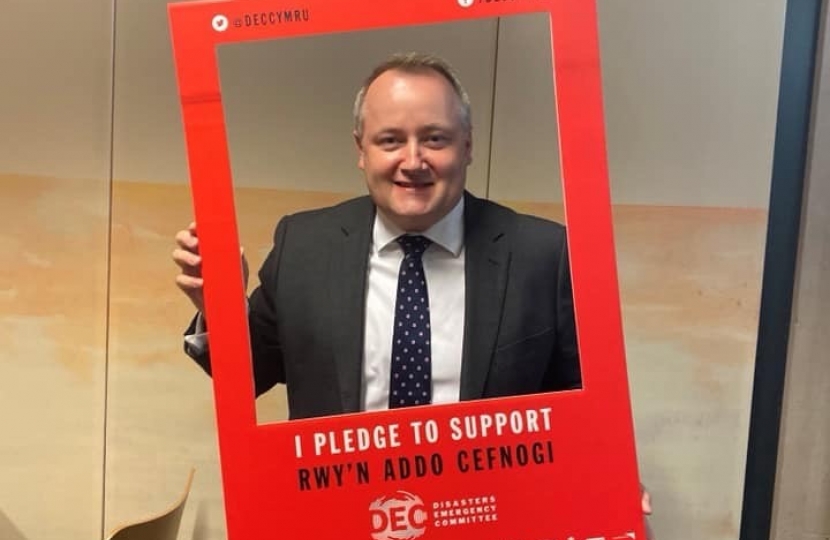 Clwyd West AM Darren Millar has commended the work of 14 leading UK aid charities after hearing first-hand this week about the vital role they play in responding to world emergencies.

Darren Millar attended a presentation in the Welsh Parliament this week by the Disasters Emergency Committee (DEC) Cymru on their work in Wales.

The DEC is made up of 14 of the UK’s leading aid charities. Together, they launch emergency appeals to help those affected by disasters in the world’s poorest countries, using a specific set of criteria to help them decide when to launch an appeal.

Of the DEC’s 14 member charities, seven work in Wales: Oxfam, Save the Children, Christian Aid, Tearfund, Islamic Relief, The British Red Cross and CAFOD. When an emergency appeal is launched they all work together to raise awareness and funds here in Wales.

“DEC are doing incredible work helping countries in need across the globe and I would like to thank DEC Cymru for coming to speak to the Cross Party Group on Wales International this week.

“Since DEC  launched in 1963, they have run 72 appeals and raised more than £1.5 billion – saving millions of lives and rebuilding communities devastated by disasters. What they are achieving

“Their priority is delivering aid and support to those that need it, as quickly and efficiently as possible.

“Their presentation this week was extremely informative and I was amazed and inspired by the generosity of people in Wales and what DEC Cymru and their partners are achieving”.