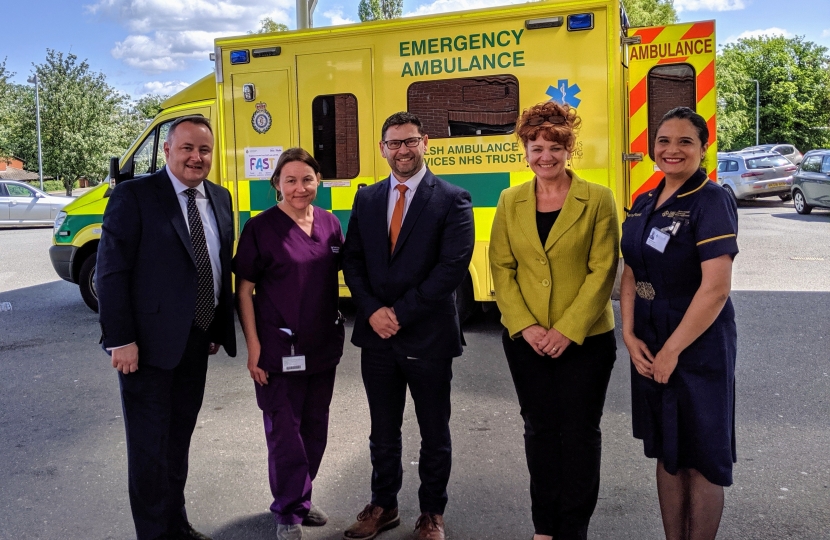 Shadow Health Minister Darren Millar AM has praised staff at a North Wales hospital after visiting this week and witnessing first hand the pressures they are facing.

Darren visited Wrexham Maelor on Monday and had a tour of the A&E department.

He said: “I took a visit to Wrexham Maelor Hospital yesterday to visit the emergency department, and I have to say a more dedicated team you will not find in our hospitals. But they were telling me about some of the pressures. When I arrived there, 10:30 in the morning, the longest wait in that department was 11.5 hours, and by the time I left it was 3.5 hours because of the hard work of people trying to make sure that people were getting the flow through the hospital.”

Closing the Welsh Conservatives Debate on Betsi Cadwaladr University Health Board on Wednesday, he again praised the staff at Wrexham Maelor, and all other hospital in Wales.

He said: “The front-line staff in all of our hospitals, including in North Wales, are absolutely heroic. They are trying to do their best in difficult circumstances each and every day. I mentioned the fact that I had visited Wrexham Maelor Hospital on Monday, and I saw what people were having to deal with in the emergency department there.

“They are amazing and incredibly talented people, but that doesn't take away from the fact that all of the evidence points to the fact that special measures in the Betsi Cadwaladr board are not working.”

The latest A&E figures show that Betsi Cadwaladr remains the worst performing in Wales, and that Wrexham Maelor hospital’s A&E department only saw half of its patients within four hours.

Last month the Public Accounts Committee found that the Welsh Government’s intervention with the North Wales Health Board has had ‘little practical impact’.