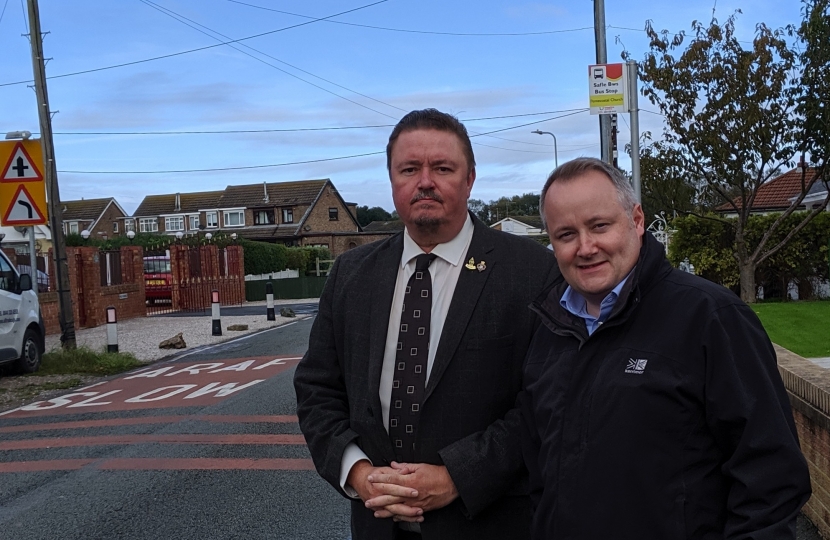 Darren met with representatives of Conwy County Borough Council on Friday to discuss concerns over highway safety on Gors Road in Towyn.

Gors Road is a busy road which acts as the main route in and out of Towyn but it is very narrow in parts and there were a number of accidents on the road this summer with vehicles ending up in the deep ditches either side of the road.

During Darren’s visit, he met with Cllr Greg Robbins, Conwy's Cabinet Member for Environment and Transportation, and highways officers, to discuss the dangers and a way forward.

“Safety along this stretch has been a worry for some time.

“Ideally, the road needs widening and a major upgrade, but the Council explained that it does not have the finance to undertake such work at this time.

“Instead, the Council have agreed to extend the 30mph speed limit along the road and to consider reducing the speed limit between Towyn and the A547 Rhuddlan Road junction from 60mph to 40mph.

“In addition, they have agreed to renew and extend the reflective verge markers at the side of the road and to install warning signs for the ditches, which are difficult to see and a danger to motorists who are unfamiliar with the road.

“Hopefully these measures will help to avoid the sort of accidents we have seen over the summer. I would like to thank Cllr Robbins and the highways officers for meeting with me and agreeing to these measures.”