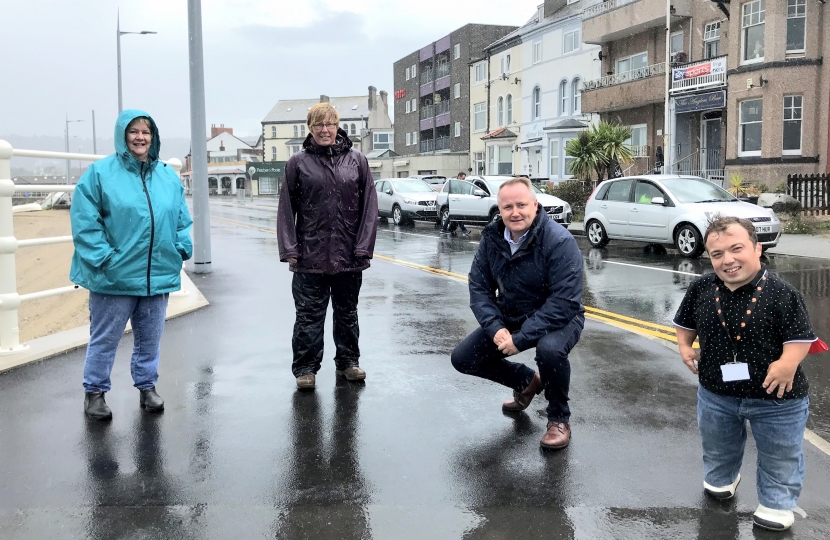 The promenade in Rhos has recently been improved and widened to create a shared footpath/cyleway, but this has resulted in a narrowing of the roadway when cars are parked opposite the promenade adjacent to the Angler’s Bar which creates a pinch point so that only single file traffic can pass causing significant delays and inconvenience for motorists.

Local campaigner Jo Nuttall organised a petition to try to resolve the issue and hundreds of local people signed. Darren is supporting residents and has been working with Cllr Glenys Baker and Cllr Jay Lusted to persuade Conwy County Borough Council to come up with a solution.

Following a meeting with them earlier in the week to discuss the concerns, Darren was pleased  to receive an update from the Council today stating that they are going to install yellow lines as requested by Darren, the local politicians and campaigners.

“This traffic issue has been a huge problem in Rhos and I am not surprised that so many people signed the petition.

“We requested that the council install double yellow lines along the raised kerb near the Angler’s Bar to resolve the problem and I was extremely pleased to receive an email from the Council today stating that thanks to the intervention of the portfolio holder Cllr Greg Robbins, they are going to install an additional section of double yellow lines in front of properties 89 to 99 on the promenade in addition to access protection road markings (white lines) across each section where there is a dropped kerb.

“In addition, any driver that parks on the access protection road marking will be liable to Penalty Charge Notice (Parking ticket) for parking adjacent to a dropped kerb, which includes vehicles displaying a blue disabled badge. The police also have the powers to issue Fixed Penalty Notices to any driver found causing an actual obstruction to another vehicle from entering and exiting their property.

“The local authority is proposing to add these changes to a Traffic Regulation Order currently being drafted by its legal officers for the Bay of Colwyn Town Council area. My only concern is that these orders can take a number of months to come into effect and in the meantime the problems will continue.

“Regardless, I am sure that residents will be pleased by today’s development and will look forward to the changes being made.”