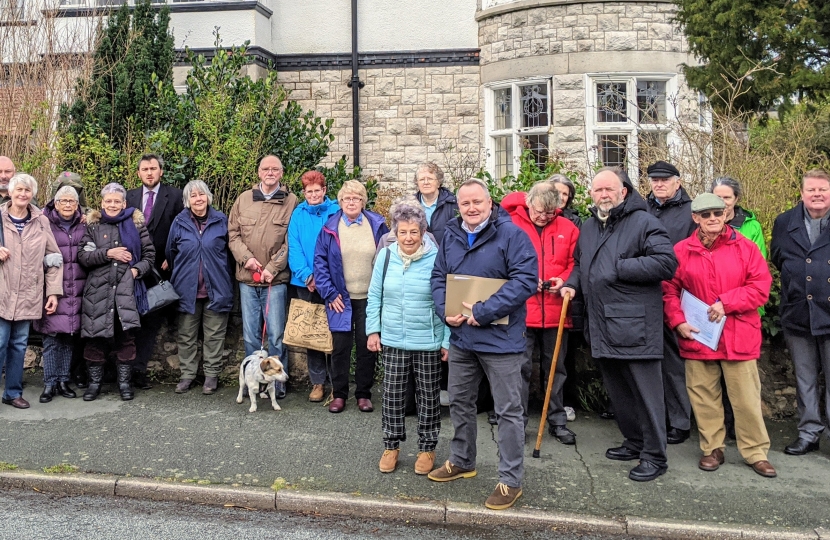 After meeting with residents who are up in arms over plans to demolish a historic building in their town, Clwyd West Assembly Member Darren Millar has called on the Heritage Minister to urgently intervene to safeguard it.

Darren met with residents in Rhos on Sea on Monday to see Larkfield House, a historic building which local housing association Cartrefi Conwy is seeking to demolish to develop apartments.

Larkfield House is a period property which is a former home of the Cayley family, which is notable in the development of the aviation industry.

Sir George Cayley Bt (6th Baronet Cayley) was an inventor and has been dubbed the ‘Father of Aviation’ due to his role in pioneering a series of aircraft which directly influenced the Wright brothers. The brothers used Cayley’s science to develop their own powered glider and attributed their success to Cayley’s ground-breaking work.

Local residents are opposed to the loss of the building and are calling for the plans to be redrafted to leave the house standing.

“Larkfield House is an impressive building and, after visiting on Monday and learning more about its history, I can fully understand why the residents are so against plans to demolish it.

“The property has an imposing presence, great character and unique architecture, yet its future is in jeopardy because Cartrefi Conwy want to demolish it as part of a scheme to develop new apartments. Should the planning application be granted then none of the existing Larkfield House or its features will remain, which would be devastating.

“The residents have no objection to its conversion or to the building of a large extension behind it, they just want a compromise so that the plans can go through that please everyone and not just the contractors.

“I have therefore written to the Heritage Minister calling for urgent intervention to prevent the demolition of Larkfield House, highlighting the successful regeneration work that has been carried out by Conwy County Borough Council in recent years which has protected the character of the Bay of Colwyn Bay and calling for Larkfield House to be redeveloped in a similar, sensitive way which retains as much of the existing building and its features as possible while still creating new apartments.

“As I stated to the Minister, this approach would safeguard the character of this prominent building and help to tell the story of the remarkable Cayley family and its association with Rhos on Sea and North Wales.

“The planning application is due to be considered by Conwy County Borough Council’s Planning Committee on the 11th March 2020 and therefore urgent intervention of Welsh Ministers is vital if we are to prevent Larkfield House from being demolished and safeguard this important building for future generations”.

Clwyd West MS Darren Millar is thrilled by news that Ruthin has been confirmed as the preferred location for the new Welsh Cycling North Wales Velodrome.