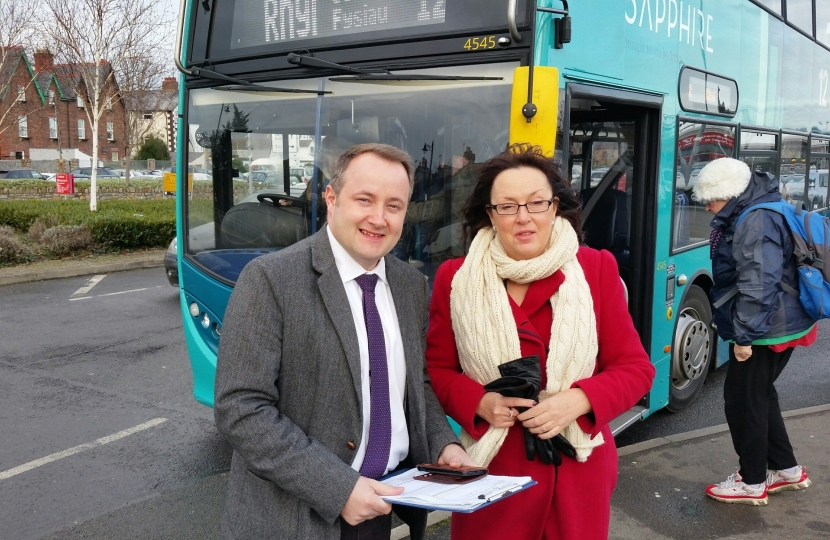 Bus transport for those who are unable to drive, particularly the elderly, can be a lifeline. I was therefore delighted when in 2002 the Welsh Government introduced the free bus pass for the over sixties.

For the past 17 years, older people throughout Wales have had the freedom to travel without worry about cost.

However, two weeks ago the Welsh Government threw that into jeopardy when it announced plans to increase the age at which people become eligible for free bus passes in Wales from 60 to the state pension age. Ministers claim they are concerned about the rising cost of the pass, with 880,000 people expected to be eligible by 2021. Transport Minister Ken Skates confirmed the move, to be introduced gradually, will be included in a proposed new law.

Myself, and many others, are deeply concerned that these changes could have a significant impact adverse impact on many older people.

As the Older People's Commissioner for Wales, Heléna Herklots, said " Accessible and reliable public transport is essential for older people, supporting them to remain independent, get out and about, visit friends and family, do the things that matter to them, attend medical appointments, access services and stay connected to their communities”.

She also stressed that increasing the eligibility age will undoubtedly affect some of the most vulnerable older people in Wales, such as those living in poverty or near the poverty line, people who have given up work to care for loved ones and those living with long-term health conditions.

Meanwhile, Age Cymru have expressed concern that people such as carers, those with disabilities or those from ethnic minorities may find it more difficult to continue working to a state pension age, and would be "less able to cope with a loss of an entitlement such as free bus travel.

I share all of their worries and I am extremely disappointed and angry that the Welsh Government are going back on their promise at the last election to protect free bus passes. It's yet another kick in the teeth from the Labour Party following their opposition to my proposals to enshrine the rights of older people into Welsh law, which they voted against earlier this year.

I know many older people here in North Wales will be deeply concerned at these proposed changes, especially those who rely on their bus pass to maintain their independence and an active social life.

Far from restricting free bus passes, the Welsh Government should be adopting Welsh Conservative proposals to extend them to 16 - 25 year olds which would help to safeguard bus services throughout the country as well as helping younger people to get to a place of education or work.

Many elderly people already feel isolated due to cuts in bus services across Wales and increasing the age at which people become eligible for free bus passes will only exacerbate that.

My constituents can rest assured I will be fighting tooth and nail to oppose these proposals.